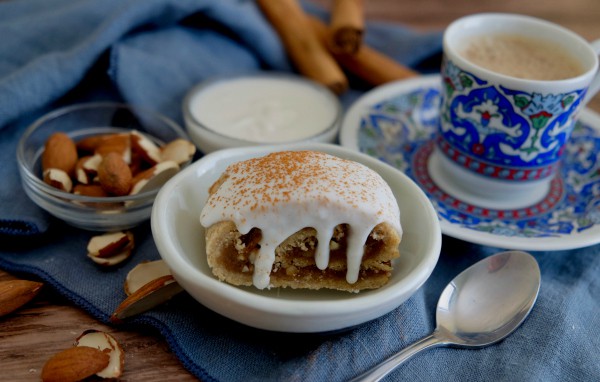 Cinnamon Buns are an old school classic pastry and one that I enjoyed getting with my Dad when I was a kid. So, when adapting these to be raw and healthy, I still wanted to retain all those incredible flavours and sensations from when I was a kid. One thing is the warm, right out of the oven feel. If you serve these right from the dehydrator, they have all those feels. The other thing was that sweetness and the burst of cinnamon and raisin. Well, the filling for these captures that 100%! For the really authentic flavour, be sure to use Ceylon Cinnamon, see the note at the bottom of the recipe post for a link on the difference between Ceylon and Cassis. Lastly, the cream cheese drizzle. So, for this we’re doing a fermented cashew cream cheese. Put it all together and these are the real deal.

You can also make them in advance, dehydrate them, cut them into portions and freeze them. When you’re ready to have some, just pop them back into the dehy for a few hours to thaw and warm up. The cream cheese glaze also freezes really well. Maybe do it in an ice cube tray so you can just defrost single-ish serving sizes.

Related: Ceylon vs. Cassia — Not All Cinnamon Is Created Equal